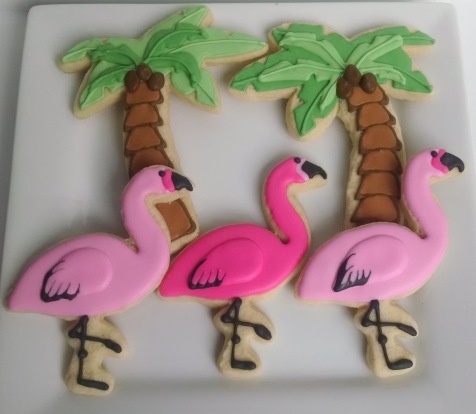 This past weekend I made up some flamingo and palm tree cookies for a little princess who was turning one.  I got the cutters over a month ago and drew up some sketches almost immediately.  Then I put them away.  While I’m always excited to try a new design, I have to admit that I’ve been a bit apprehensive about this one.  Not the palm trees, those would be fun.  I mean the flamingos with their skinny necks and legs.  But despite their very fragile form, I was determined they were NOT going to break over and over again like the tassels in the graduation caps.  Nope.

To prep I made sure that all the dough was good and solid in the fridge for several hours and tried to cut them in small batches to keep the dough as cold as possible and used the backside of a butter knife to nudge out the small parts.  Yeah, that didn’t work as nicely as I had hoped.

Brian to the rescue.  I love that man.  He suggested using Pam cooking spray to prevent the cookies from sticking to the cutters so much.  Let me tell you that worked SO much better.  I didn’t want too much of the spray on the cookies themselves so in the end I used a paper towel to reapply the spray whenever the dough started sticking again.  Why didn’t I think of this before?

So without much more trouble the cookies were baked and I got the icing mixed.  I just love how the green in the palm tree looks with the flamingos.  It took a while to decide on the shades of green and pink.

I had originally thought I would do the legs and beaks in the same dark brown in the palm trees, but I just didn’t like it in practice so I darkened up brown with black.  Much better.

There is something majorly giggle worthy about an army of flamingos.

The palm trees were a bit more complicated.  I really really felt compelled to outline each leaf on the first layer, but all the lines started bleeding into each other anyway and it caused a weird lumpiness to the base.  So after the first one was outlined I realized how awful it would look, smudged all the inside lines together and filled it in before it dried.  Changes in plans can be good, especially since this saved some detailing time.  The palm trees were finished with a second set of leaves and thin lines for the veins. 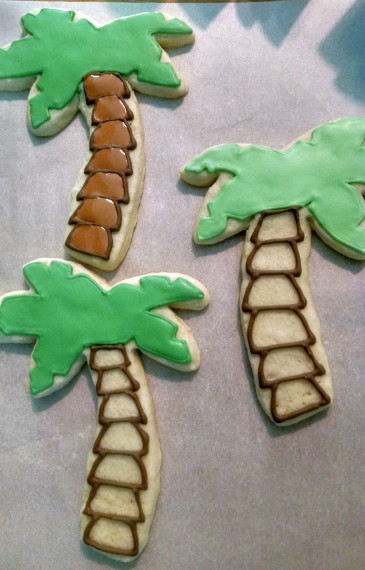 I really like how these came out.  The flamingos took a lot of research and sketching before I settled on the face.  The black on the tips of the wings was a last minute decision.  I wanted a way to show a little definition with the wing and feathers without drawing too much attention from the rest of the bird. 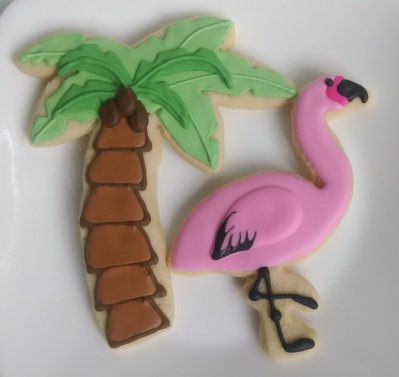 View all posts by frostedbearbakery