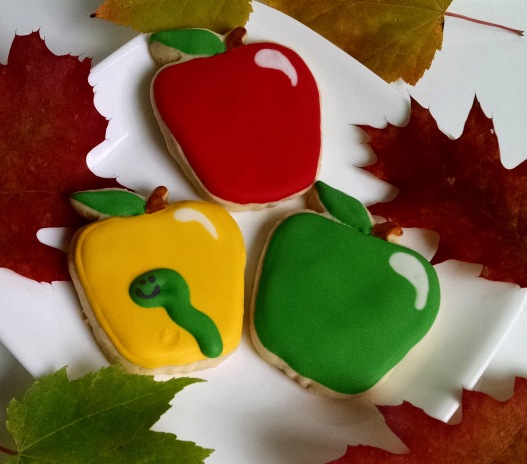 Well!  Fall is here, suddenly, furiously, and I fear that the coat-free days are done.  Who am I kidding?  It’s October.  Time to let Summer go.  It’s always around this time of year when I go into this strange state of denial.  Winter and cold weather are not my friends.  The only consolation lies in the events of Fall: leaves changing, autumn festivals, fun holidays, and of course apple picking!

It’s unfortunate that the summer and spring were so dry this year, the apples in and around New Hampshire are smaller than usual.  To be honest, nothing did well in my garden at all.  Small children and lack of time to water are definite culprits in that case.  Usually though we get enough rain that it’s not a problem.  Anyway, back to apples!

I didn’t have a ton of time this week to decorate complicated cookies, so I opted for simple.  Red, green, and yellow apples with a little white “shine” flourish and good to go.  The white “shine” was added while the colored icing was still wet, the leaves were piped on after everything was dry.  I was worried that the green would bleed over to the other colors, since I only used one consistency for the entire thing.  For all four colors I used a consistency slightly thicker than flood.  Maybe 8 seconds?  I can’t say I timed it, but I did find it was nicer to work with than my typical flood.  It may be that there was much more glaze icing in this mixture.  I added more because I had no worries about the icing holding its shape.  That’s my general rule, more glaze vs royal icing means even better flavor so I add as much as I possibly can depending on the level of detail needed. 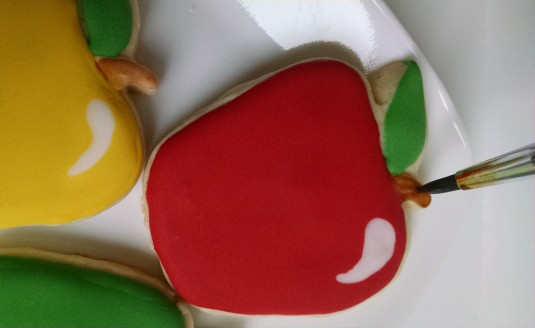 The stems were painted on with some brown gel color and vodka.  This decision was part aesthetic (because I wanted the streaks) and part laziness (because I didn’t want to mix up a batch of brown for the tiny stems).  The painting did give me a great idea for later this fall.  Stay tuned!

The little green worm was an afterthought.  I think that next time I’ll add a hole in the apple with darker icing while the flood icing is still wet.  Then it’ll look like the worm was munching his way through.  By the time I considered it all the apples were dry and it was too late.  Oh well, it’ll be next time.  I really like how these are just simple and still very cute.

If you do get out apple picking this year bee careful of and bee kind to the bees around the fallen apples.  They tend to be a little tipsy and slightly aggressive after all that sugar!

View all posts by frostedbearbakery